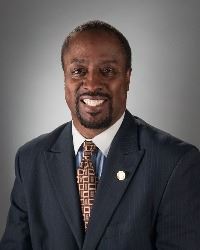 Henry Mitchell, III, graduated from Henry Grady High School in Atlanta, and soon after high school enlisted in the United States Army where he served his military time at Schofield Barracks in Hawaii. After completing his tour of duty with the Wolfhounds, he later received an Honorable Discharge from the Armed Forces.

Upon his departure of the Armed Forces, he went to work in the broadcasting industry - known as "Mitch Henry". He worked for many radio stations around the country including 1400 The Touch (Pennsylvania), WIBB (Macon), WBLX (Alabama), V103/WAOK (Atlanta), and has held numerous positions from on-air personality, production director to operations manager.

At present, he is:

Adding to his civic commitment, Henry served as Mayor Pro Tem (Vice Mayor) of the City of Douglasville where he was tasked with the responsibilities of Chairman of the Finance, Information Technology and Personnel/Organizational Committees. He is the founder and Chairman of the Northside Community Initiative, the annual Multi-cultural Enrichment Back-to-School Festival, Communications Chairman of the United Negro College Fund, and Assistant Coach of the Winston Raiders 150 pound Football Team.

Currently, he serves on a number of local boards, including:

Henry holds a Degree in Business Administration, and served as Student Government Association President of his college graduating class. He is Federal Communications Commission licensed in radio and television broadcasting, and is a Georgia Licensed Realtor.

Success is measured not so much by the position that one has reached in life, but by the obstacles that one has overcome while trying to succeed!