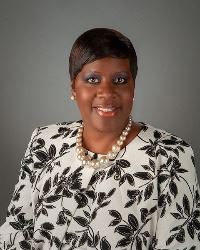 Dr. Romona Jackson Jones serves as the first African American Commission Chairman in the history of Douglas County, Georgia. Dr. Jones was elected to serve as Commission Chairman on November 8th, 2016, and re-elected for a second term on November 3rd, 2020.  She is the daughter of Mattie Howell Jackson and the late Johnnie L. Jackson Jr. of Memphis, Tennessee. Shortly after graduating from Hamilton High School in Memphis, Dr. Jones followed in the footsteps of her father, a Korean War Paratrooper, by joining the U. S. Army for three years. She married a U. S. Marine and is officially retired as a former spouse of 19 years.  Dr. Jones earned a bachelor’s degree from Southern Illinois University, a master’s degree from Chapman University, and a doctorate degree in Educational Leadership (Higher Education) from Argosy University.

Dr. Jones worked in the healthcare industry for 40 years, of which 31 years involved:

She has worked in federal, state, and local government, private, non-profit, and for-profit organizations. She was among the first Civil Service employees in the Nation to coordinate and direct a federally regulated environmental program for the U.S. Navy. She has led several multi-million-dollar master facility planning and execution projects for healthcare organizations throughout the United States.

Dr. Jones is a visionary leader and business owners and colleagues alike have quickly given her well-earned respect. Dr. Jones's ventures helped secure $3.3 billion in investments within her first year in office. She added to the pecuniary mix when she welcomed a global technology company called "Switch". This $2.5 billion investment sets the mark as the most significant single capital investment in Georgia’s history.

Dr. Jones is named among the 100 most Influential Women in Georgia Engineering for making Georgia a better place to live, work and play. Through her notable achievements, she’s made significant contributions towards mitigating the spread of COVID-19 in Douglas County.  Dr. Jones received the 2022 Fred Agel Award at the 92nd Annual Conference presented by the Georgia Public Health Association for outstanding commitment and service promoting public health.  The National Coalition of 100 Black Women-Northwest Chapter, made Dr. Jones the recipient of the 2022 Public Policy Award, for her outstanding work as the Chairwoman for the Douglas County Board of Commissioners at the 9th Annual Women of Impact Awards Celebration.

As Chairman of the Douglas County Board of Commissioners, Dr. Jones oversees and is responsible for a $181 million-dollar budget. Under Dr. Jones's leadership, Douglas County has gained a record-breaking amount of economic development investments totaling $4.8 billion dollars with continued growth in Douglas County.  Dr. Jones serves as Chairman of the BOC Finance, Purchasing Oversight, Fire/EMS, Public Safety, Tax Abatement Compliance and Beautification Committees.

Dr. Jones is focusing on many issues with attention on: